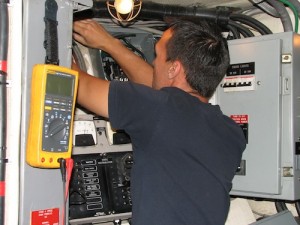 My first job on a boat was replacing a holding tank in a commercial fishing vessel. I was 16, and while it wasn’t glamorous, I have loved working on boats ever since.

I started an electrical apprenticeship in 2004 – but I didn’t actually find commercial electric all that exciting. So when an opportunity opened up to go commercial fishing in Alaska, I took it and ended up becomming the ship’s engineer – in charge of maintaining all systems onboard including: propulsion, refrigeration, electrical, and mechanical. I found electrical systems to be the most fascinating, and when the captain decided to get his boat completely rewired in 2006, I was hired to help a local marine electrician, I knew it was something I wanted to specialize in. After the rewire was done I began solely working for that electrician and studying electrical codes and practices in my spare time. I have been doing marine electrical ever since, and in 2011 began my own company – Seaworthy Marine Electric.

Besides the installation and repair side of things, I have always been interested in the theory of electricity and electronics. So in 2007 I started taking college classes and eventually earned a Bachelor’s degree in Physics and Applied Math, with a focus in electricity and magnetism. That’s where the design side of things comes into play. With a deep understanding of electrical theory, I am confident I can not only troubleshoot the most difficult problems, but also engineer solutions to simplify existing electrical systems onboard.